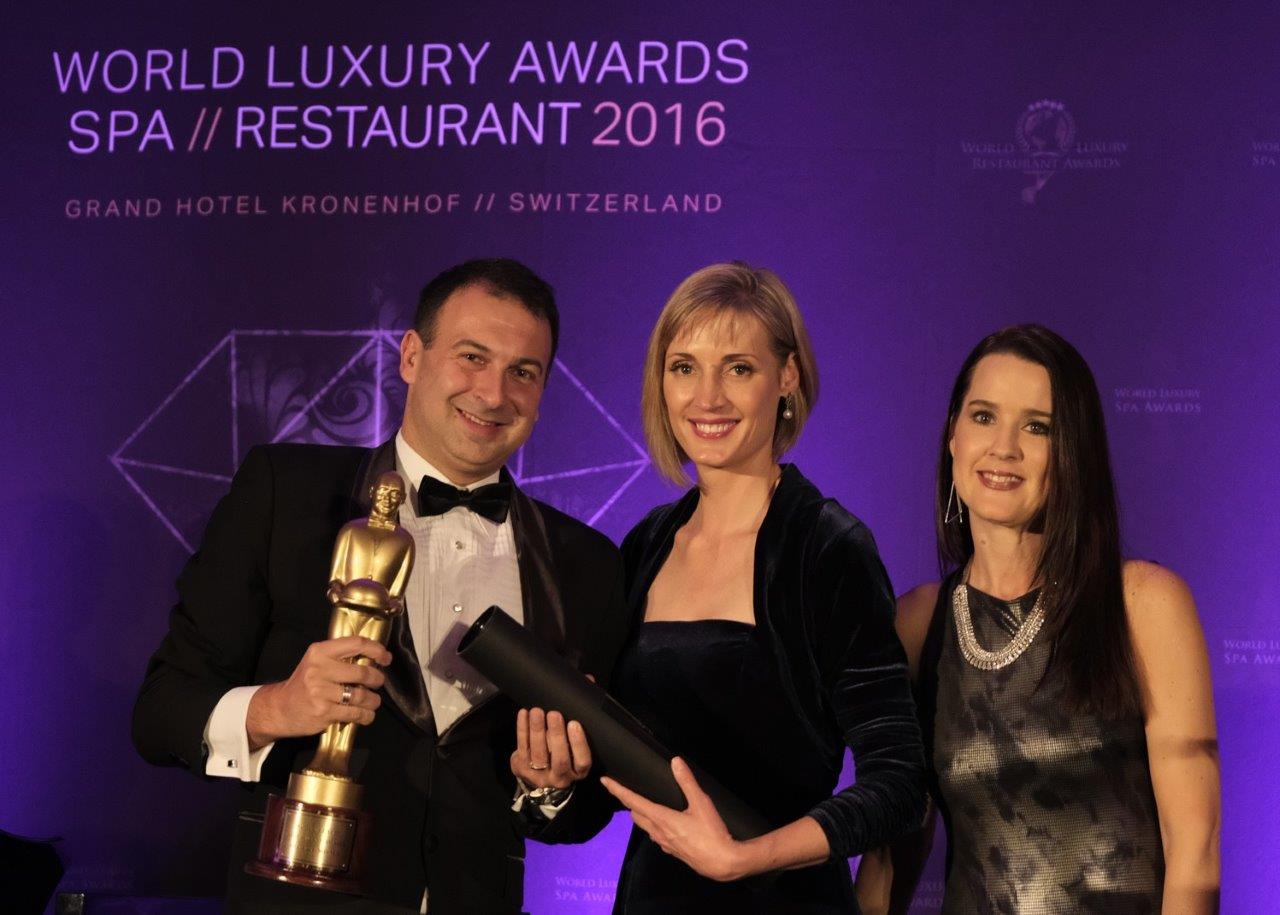 Representatives from luxury restaurants and spas from 38 countries arrived to a grand red carpet welcome with champagne from Veuve Cliquot, in anticipation of receiving an award at this special black tie gala event, which was hosted by Kiki Maeder, TV and radio presenter for the Swiss national broadcaster Schweizer Radio und Fernsehen.

The guests were seated in the Grand Restaurant for a much anticipated evening of fine dining and refined entertainment. An impressive 6 course meal presented by Executive Chef, Fabrizio Piantanida, was savoured throughout the evening.

Master of Ceremonies, Kiki Maeder welcomed everyone to relax and enjoy the event proceedings. Thereafter, Linda Cooper, Executive Manager of the Restaurant Awards gave some words of thanks to all involved with the event, including our valued media partners for their ongoing support and contribution, after which, Ariane Ehrat from St Moritz Engadin Tourism Organisation, delivered her keynote address. All Country awards were presented first, followed by Continent Winners and then the much desired Global awards.

The Global Restaurant of the Year Award went to Jahn Restaurant from Conrad Hotel Koh Samui, in Thailand. Jahn received two global awards, one for Thai Cuisine and one for Ambience/Romantic Atmosphere. This restaurant received the most votes overall and certainly did well to shine in Thailand. Thailand is a highly competitive country with a strong passion to deliver the best in all aspects of food preparation and presentation with a special focus on service delivery. Well done JAHN!

Although it was not possible to steal the limelight on the night, the very close first runner up for the Overall Winner awards was Kokkeriet, an extremely popular Danish restaurant which brought in enough votes to easily win the Global award for Fine Dining Cuisine. Kokkeriet was there to receive their award in this highly competitive category.

The most popular category of all the 35 nominated restaurant categories, was that of Luxury Hotel Restaurant; the Global Award for this went to Passion by Martin Berasategui in Mexico. Passion received the most votes overall in this category, although they were not able to join us on the evening, they were a well-deserved winner!

The event was closed with the presentation of a certificate of recognition to the Grand Hotel Kronenhof, Pontresina, for hosting this fabulous inaugural event.

The World Luxury Restaurant Awards has had a very exciting first year and we have only just begun, these awards are still a fraction of what they will be in years to come. Luxury establishments all around the world can compete on an even playing field, together with our positive promotion, support and exposure, we ensure the recognition these venues deserve.

Well done to all our 2016 participants! We look forward to working with you again for the 2017 awards and hope to see you at the JW Marriott Hanoi for the 2017 World Luxury Restaurant Awards!